Håkon Gullvåg was born in Trondheim in 1959, and works mainly in Trondheim and Oslo. As a painter, he has had a central position in the Norwegian art scene since his artistic breakthrough at Gallery Dobloug in 1983, and numerous major institutions have purchased his works.

Gullvåg’s characteristic style makes his works easily recognizable. Since the early 1990s his foremost hallmark has been monumental compositions that exude baroque vigour. The motifs are suggested with quick brush strokes in pure and harmonious colours, against an evenly coloured background. This dramatic mode of painting underscores a theme that receives an increasingly central position in Gullvåg’s art: the transience of being.

The motifs are marked by surrealistic elements. Memories from his own childhood and that of his children’s are leitmotifs in his artistic oeuvre. In addition, still lifes and literary motifs become increasingly important in the 1980s. Since 1995 Gullvåg’s ecclesiastical commissions have positioned him as one of Norway’s foremost artists in this field. Almost parallel to this, he has received great acclaim for his many portraits of well-known Norwegians – in later years his portraits of the king and queen have generated much attention. Also his works temporarily mounted in Nidaros Cathedral, summer 2005, created great media attention and many heated debates. Indeed, it has been several decades since Norway last saw an artist who managed to create so much debate and at such intensity.

Gullvåg has the last decades also received recognition for his graphic works. Most known for his lithographs, recently he has also immersed himself in metal graphics. 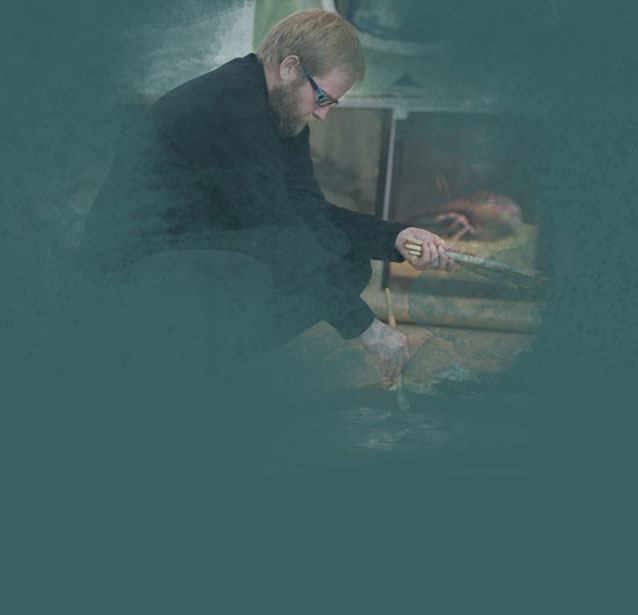